How to build a PC for Deep Learning (on a budget)?

We’re going to see in this article how to choose the right components when building a personal computer for Deep Learning.

The first goal of this post is not only to tell you what specific hardware you need to buy but also why you need to buy certain components, so that you will be able to to choose them based on your needs and budget.

The second goal of this post is to find the components that give the best value for their money, trying to keep the budget as tight as possible, but still being able to build a good machine for normale usage and deep learning.

What are the main components on a computer?

Each component needs to be there for a specific reason, and the requirements are different depending on the purpose that the computer has, if it’s for simple office usage, gaming or deep learning.

We’re going now to focus on each single component.

The CPU is the main processor of our computer, so in reality is the unit which processes all the information to run the programs we use and to run the operating system itself.

At the same time we want a decent CPU to have a fast computer that will be able to run multitasking when we open many applications.

A 6 cores (12 threads) CPU is right now a good enough processor to use the computer to work even with heavy programs, and even if you like playing video games, it will be good to game in FULL HD (of course backed up by a good graphic card as well).

AMD or Intel?
On CPUs with similar performances usually AMD has a better price, so my choice goes to AMD.

The GPU is the most important component for Deep Learning, as it will take charge of all the computing power to run the deep learning libraries when we train/test our models.

How to choose the right GPU?
When we choose a GPU we need to take into account these 2 things:

There is no real competition on Graphic Cards for deep learning and Nvidia is the only way to go at the moment.
Nvidia developed CUDA, an architecture which enables parallel computing and it’s compatible with the most important deep learning libraries (Tensorflow, Pytorch, Keras, Darknet and others).

What about AMD, is there an alternative AMD version of CUDA?
The amd CUDA alternative exists and it’s called ROCM, but it still is not popular, there is lack of support compared to nvidia and the performances are way too low still, to be taken into consideration as a real alternative.

The motherboard is the board which connects all the components together.

How to choose the motherboard?
When choosing a motherboard we need to take into consideration:

The RAM (Random Access Memory) on a normal usage of the computer is important when we want to open many applications, as once opened, they will be temporary loaded on the RAM).

For deep learning I suggest a minimum of at least 16 GB and a minimum frequency of 2400mhz.

The PSU is the unit which gives the current to all the components of the computer.

How to choose the PSU?
When choosing a PSU we need to consider:

A 600watt PSU will be good enough to support all the components that I suggested you in this post.

We need a fast memory to install and run the OS system (windows or linux) and a big memory to save the files.

It is a good option to get 2 different memories:

For the OS we can get a NVMe, which is a really fast SSD drive which can be connected to the PCI express of the motherboard.
I suggest to buy at least a 250gb disk to install the OS sytem.

As second drive, we can by a classic internal Hard Drive. The price is really low and we can get a big memory 2tb for just a bit more then 50 dollars.

How to choose the Case?
When choosing the case you need to take into account two factors:

In conlusion, I suggest you to use this post ad a guideline and search for your own components once you understood why you need them.
Keep in mind that the prices shown here may be different depending on the time you read the post and also depending the country you’re in.

Detect, Track and Count any Object with Computer Vision

Build your computer vision project even if you have basic programming knowledge. 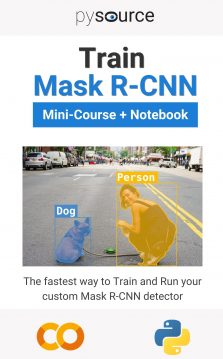